China’s Entrepreneurs Are Wary of Its Future

The growth rate of China’s peer-to-peer lending transaction volume dropped by nearly half in 2016, as the industry faced reshuffling amid a slew of compliance regulations.

Last year, the transaction volume of P2P lending nationwide, which involves small businesses or individuals borrowing money from online investors, exceeded 2.8 trillion yuan ($403 billion), increasing by 138 percent from a year earlier. But the growth slowed down to slightly more than half of the growth rate in 2014 and 2015, according to a report by P2P001, a Shenzhen-based financial web portal, on Monday.

Industry experts said P2P lending companies have moved slowly toward enabling compliance regulations, fighting against what they see as challenges including the watchdog encouraging banks to provide custodian services for investor funds used for platform transactions. The China Banking Regulatory Commission and three other central government departments jointly issued interim measures for the administration of the business activities of P2P lenders on Aug 24 last year.

According to the interim measures, P2P lending companies should select qualified banking institutions as their fund custodians. As of the end of 2016, 184 P2P lenders, or 7.98 percent of 2,307 P2P lenders that were running without severe financial problems, launched a fund custody mechanism, which they established directly with commercial banks. Another 122 such companies signed a fund custody agreement with banks but had not yet launched the mechanism, the report said.

Deng Jianpeng, vice-president of the Chinese Internet Financial Innovation Research Institute, said: “The current regulations increased the operating costs of P2P lending platforms. A large number of them will possibly vanish in the next two or three years.

The platforms that demonstrated relatively higher compliance with standards will be on sale, and those showing low compliance will be forced to close.”

Wang Shi, chairman of Hepai Online, a Shenzhen-based P2P lending company, said: “The P2P lending industry is undergoing a restructuring and will see the establishment of a preliminary structure in 2017.”

He expected to see the withdrawal of many P2P lenders from March to June and a decrease in the monthly transaction volume after August.

Yin Zhentao, secretary-general of the Research Center for Financial Law and Regulation under the Chinese Academy of Social Sciences, said: “The continuous launching of internet financial policies will put the internet finance industry on the right track. There will be a transition to standard-compliant growth.” 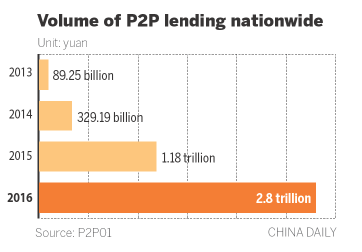 The peer to peer lending market in China is the largest in the world. Thousands of platforms populate the online lending sector. The lack of appropriate regulations has allowed many platforms to set up operations quickly and easily. It has enabled incredible acts of fraud.

Today with stricter rules coming and Chinese officials becoming more vigilant against bogus online lenders, the industry is finally slowing.  One of the rules requires online lenders to work with custodians for investor funds.  According to an article in China News, at the end of 2016, 184 of the 2300 P2P lenders had established such a relationship. Another 122 were in the process of signing a custodial agreement but the majority still have not complied with the law. According to an article in China News, transaction volume dropped by almost half in 2016.

“The current regulations increased the operating costs of P2P lending platforms. A large number of them will possibly vanish in the next two or three years.”

Yin Zhentao, secretary-general of the Research Center for Financial Law and Regulation under the Chinese Academy of Social Sciences, internet finance policies will put the industry on the right track to “standard-compliant growth.”