China is trying to implement an ambitious “Made in China, 2025” plan to upgrade technology and product quality in a desperate move to battle rising pollution and falling exports. It is seeking the best technologies from the Western world in areas like new generation Information Technology, semiconductors, robotics, new energy vehicles and medical devices.

Chinese leaders are losing patience with China’s image as “factory to the world” for low-end goods. They want local industry to add value by scaling up their capabilities in engineering, designing and marketing by 2025. 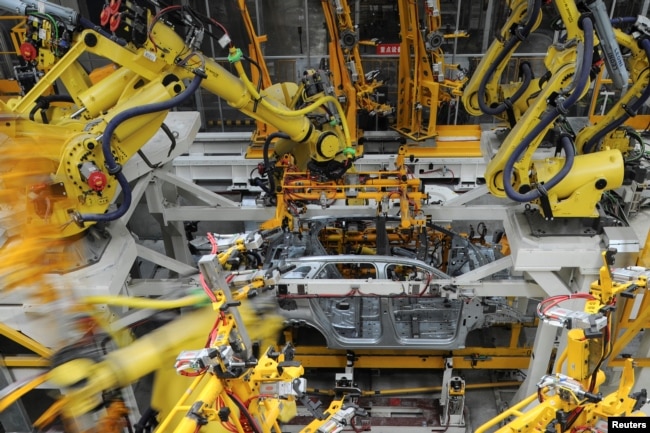 FILE – A view inside the Dongfeng Peugeot Citroen factory before it starts up production in Chengdu, Sichuan province, China, Sept. 6, 2016.

“European business is facing intense pressure to turn over advanced technology in exchange for near market access,” Joerg Wuttke, president of European Chamber of Commerce in China, said on Tuesday. The government is subsidizing some areas like robotics, resulting in overcapacity, which in turn poses serious marketing challenges for both Chinese and foreign business he explained.

The 2025 plan is so important that Premier Li Keqiang reported its progress in his annual Work Report to the National People’s Congress, the Chinese parliament, last week.

“We took further steps to implement the Internet Plus action plan and the national big data strategy, fully implemented the Made in China 2025 initiative, and implemented and improved policies and measures to encourage people to launch businesses and innovate,” he said.

But this is one of those challenges that a Communist decree cannot resolve. China is facing resistance from Western countries, whose technology it needs.
The plan is up against some serious challenges, which include a move by three European countries, Germany, France and Italy, to scrutinize attempts by Chinese companies to buy out local companies with the sheer money power behind highly subsidized state-owned companies.

“We don’t want state monopolies in our backyard. We want acquisitions to be driven by market forces, not state intervention,” Wuttke said.

U.S. President Donald Trump has also indicated he wants his administration to closely examine investment proposals coming from China. He has also threatened to impose a high 45 percent duty on Chinese goods on the grounds they are highly subsidized in China. 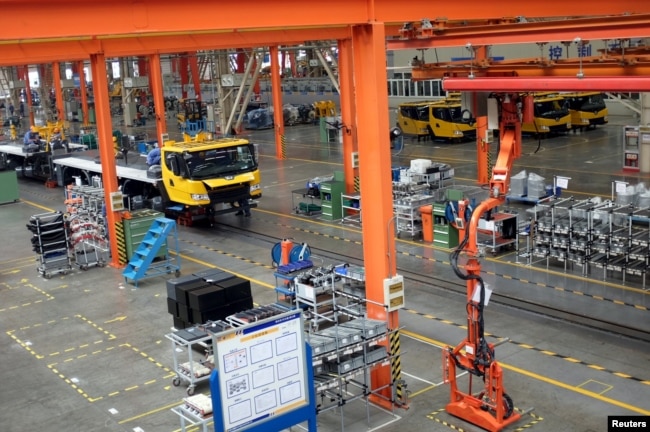 “Investments in industries such as semiconductors are likely to trigger concerns over defense-related uses,” Jost Wubbeke, head of program for economy and technology at Merics, told VOA.

There are both positive and negative aspects of Chinese investments, which increased 77 percent in 2016 compared to the previous year.

“The majority of these [Chinese] investments has positive impacts on the target countries. However, the significant increase of state-supported investment in high tech industries could cause a large-scale transfer of critical technology,” Wubbeke said.

China is also facing problems internally because the government prefers using a set of state-owned companies for buying and implementing new technologies. The more dynamic Chinese private sector has little role to play in the effort. 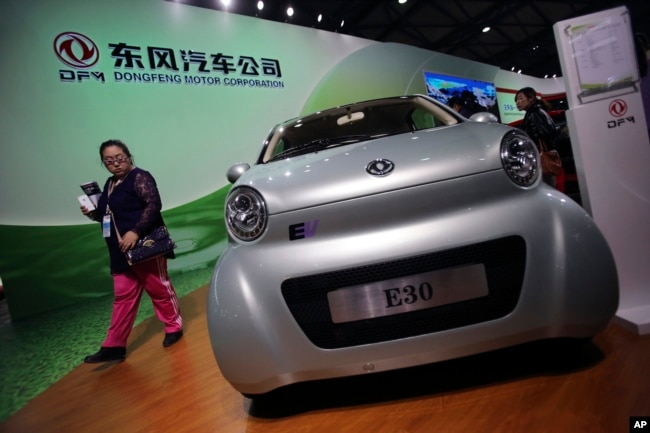 “They [government leaders] do this with the tool box out of the socialist backyard, meaning that they want to steer the companies, they want to subsidize the companies,” Wuttke said.”We think that China would be better served if they leave this to private Chinese enterprises to drive this forward”.

The European Union Chamber of Commerce is worried China is picking the wrong winners, preferring SOEs instead of private enterprises like Alibaba and Tencent. “These are the guys that are really innovative,” he said, referring to Chinese private entrepreneurs.

Much of Chinese industry uses low and medium range technologies, and the transition to digitalization and robotics may not be easy. Most industries still rely heavily on manual labor and low-level automation. The share of robots is very low.

Despite concerns, analysts point out that Beijing’s technology acquisition drive opens up a wide range of opportunities for foreign companies, which may not be available in any other country on the same scale as China.

“Made in China 2025” offers enormous opportunities for foreign businesses in the short term as China needs critical core components and advanced manufacturing equipment from abroad.In the long term, however, “Made in China 2025” seems to be a substitution strategy with the aim of replacing foreign products with Chinese products, Merics said in its report.

“Europe needs to find a way to keep the door open for positive investments, but at the same time screen the problematic ones,” Wubbeke said.