SHANGHAI — In China, it’s all about whom you owe.

That precise question — who owes what to whom? — shook the Chinese industrial town of Zouping in recent weeks. Some businesses closed. City officials engineered a desperate corporate takeover. An executive was detained by the police.

The problem: Local companies had agreed to guarantee hundreds of millions of dollars of one another’s loans. When some of those loans went bad, the impact rippled across the city.

Zouping’s plight offers a sobering example of the problems that could lurk within China’s vast and murky debt load. A nearly decade-long Chinese lending spree drove growth but burdened the economy with one of the world’s heaviest debt loads, equal to $21,600 worth of bank loans, bonds and other obligations for every man, woman and child in the country. Debt in China has expanded twice as fast as the overall economy since 2008.

China, the world’s second-largest economy after the United States, has considerable firepower to address any financial crisis. But many economists worry that hidden debt bombs could expose the breadth and severity of the problem.

The Chinese government has begun an urgent effort to discourage companies from guaranteeing one another’s bank debts, ordering local banking regulators across the country to file comprehensive reports by the end of the month on the problem. But sussing out the extent could be difficult.

“Because of the limited transparency and disclosure,” said Grace Wu, a senior director and the head of China bank ratings at Fitch Ratings, “it’s hard to know where the true risk lies.”

Loan guarantees are just part of a much broader debt challenge in China. The ratio of debt to economic output has soared since 2009 as the government has resorted to continuous monetary stimulus to prevent the economy from decelerating sharply. An International Monetary Fund analysis late last year suggested that the rise in China’s ratio was comparable to the increases in Japan’s, Thailand’s and Spain’s ratios before their respective financial crises over the past quarter-century.

Chinese economists have consistently argued that their country is uniquely able to handle high debt because it has little foreign debt and because the government’s control of the banking system allows it to respond quickly.

One of the paradoxes of China’s debt troubles is that the country is awash in debt, yet publicly listed or privately held companies can find it hard to borrow. The state-controlled banking system lends mainly to state-owned enterprises, which can seem like a good credit risk because they have implicit government guarantees.

In response, private companies often band together, guaranteeing one another’s borrowings, to give bank credit officers more confidence that loans will be repaid. The downside is that if one company runs into trouble, it can drag down the other companies that guaranteed its debts. Those other companies, in turn, can set off their own credit guarantees from yet more companies with no direct connection to the first one.

A government-controlled website that releases financial regulatory decisions said at the end of last week that the China Banking Regulatory Commission had asked its branches to examine loan guarantees across the nation immediately because of problems in places like Shandong province, where Zouping is.

The commission has instructed its local regulators to pay particular attention to loan guarantees in sectors like aluminum production and steel manufacturing, the website said, highlighting two industries suffering from overcapacity in China. Both industries overinvested in new factories by obtaining enormous loans at low interest rates from the state-controlled banking system.

The Obama administration last year and now the Trump administration this year have strongly criticized China for bankrolling the overexpansion of its steel and aluminum industries, contending that the loans have made it hard for steel and aluminum companies elsewhere to compete. China has begun closing steel mills, and has been discussing plans to close some of its less technologically advanced aluminum smelters as well.

The emergence of a banking crunch in Shandong province is politically awkward because the Chinese government has just turned to the province’s former governor to bring order to China’s banking system. Guo Shuqing, the former governor, is considered one of China’s leading advocates of financial reform. Ms. Wu, at Fitch, said that the problems in Shandong were common to many provinces.

“It’s a national issue for us,” she said. “It is not an issue bounded by geography.”

Until this month, Zouping’s biggest international claim to fame was as the subject of books examining its rise from rural backwater to industrial center. Many workers left the wheat and cotton fields to work in the metal foundries and other factories that popped up in the area during China’s boom. The town has an urban population of about 110,000 residents — a figure that does not include migrants lured by the prospect of jobs. 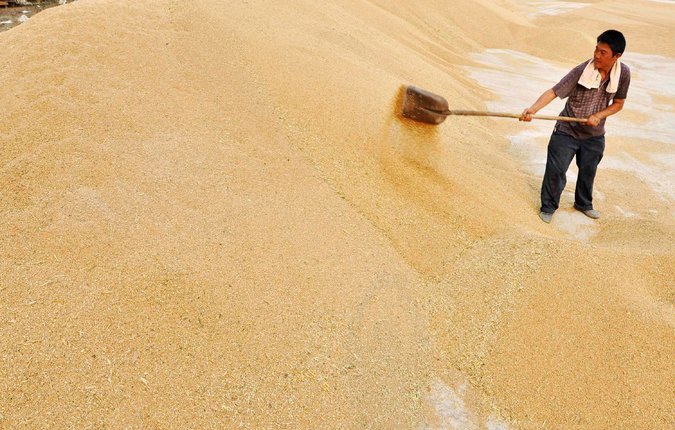 A farmer piled wheat after a harvest in Zouping in 2013. China’s debt load has expanded at double the rate as the overall economy since 2008. CreditChina Daily/Reuters

Zouping’s problems have their roots in a company called the Qixing Group. The conglomerate started off in aluminum but diversified into real estate and other sectors. When it declared last month that it had financial problems, that called into doubt the loans that others had guaranteed.

That led to a messy and acrimonious scramble for control of factories and other assets and a temporary shutdown at some of Qixing’s businesses. The local government ended up orchestrating a takeover of Qixing by its local rival, the Xiwang Group. When Qixing’s executive vice president, Zhao Qiang, strongly complained two weeks ago, he was promptly detained by the police.

“Xiwang has always wanted to merge with us,” said Li Zemin, a spokesman for Qixing, “but the appearance of their devouring us is bad.” Mr. Zhao has just been released by the police, Mr. Li added.

DealBook delivers the news driving the markets and the conversation. Delivered weekday mornings and afternoons.

A stock market filing by Xiwang this month offered a glimpse of the extent of the problem. Xiwang said that it had previously guaranteed $421 million worth of Qixing’s debt, though it had obtained collateral.

Wang Yuanyuan, a corporate planner for Xiwang, said that the company had paid Qixing’s employees for their most recent month of back wages and reopened Qixing’s main aluminum operations. She added that the workers were still owed many previous months of back wages.

Zeng Libin, the president of the China Aluminum Association, said that Qixing made only low- or midlevel aluminum products, and brought its problems on itself.