A pivot point for the makeover is November’s China International Import Expo, a trade-show brainchild of President Xi Jinping, who has pledged to rebalance the Chinese economy and “chart the right course for economic globalization.”

The corporate interest reflects China’s vast buying power, from advanced industrial-production systems to consumer goods like food and, increasingly, services. Some economists inside and outside China predict its appetite could soon jolt the world as much as its vast factory output has in recent years.

For now, touting China’s role as an importer comes down to geopolitical necessity for President Xi in the face of an unprecedented pushback against his government’s global ambitions.

China runs a merchandise trade surplus with at least 96 countries, according to an Organization for Economic Cooperation and Development analysis. Meanwhile, it’s seen as keeping its own markets closed to foreign businesses while Chinese companies enjoy easy access to much of the world. The lopsided dynamic vexes politicians globally and has spawned the backlash— from the tariffs President Trump has placed on $250 billion in Chinese products to criticisms that China is stealing technology and practicing debt-trap diplomacy with offers of big-ticket infrastructure building to developing nations.

Beijing defended its trade policy in a mid-September rejoinder to Trump administration action, saying in a policy paper, “It is not China’s intention to have a trade surplus.” China says it is already the world’s second-biggest importer and will spend $10 trillion buying goods and services around the world over the next five years.

“They are trying to make a visual splash to show their sensitivities to the concerns,” said Jacob Parker, a Beijing-based vice president at the U.S.-China Business Council. Compared with tackling structural changes like reducing Chinese government support for local competitors, Mr. Parker said, absorbing more imports is “one of the most easily addressed of the concerns that the international business community has raised.”

To support the import expo, government bureaus across China are organizing Chinese companies into buying “alliances” for the show, sometimes complete with spending targets, and promising them subsidized travel to Shanghai, according to public notices. Shopping for imports, according to a statement from industrial giant China National Machinery Industry Corp., is a “political task.” 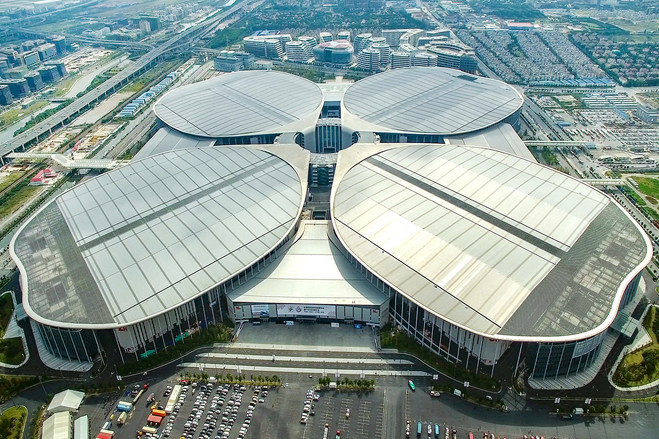 The China International Import Expo will be held in this 15.8-million-square-foot venue starting Nov. 5 in Shanghai. PHOTO: ZUMAPRESS.COM

Also for months, Chinese Ministry of Commerce officials have fanned out around the world, leaning on foreign companies, embassies and trade groups to send senior delegations to the expo, calling it one of the country’s key diplomatic endeavors this year.

“They moved so fast and the program was sold out so fast,” says Carlos J. Valderrama, head of the Los Angeles Area Chamber of Commerce’s international section. He says California companies see a public-relations value in signing up to an event that China’s president considers a priority.

Despite the corporate enthusiasm to sell more in China, few foreign governments or multinational corporations appear keen for their most senior people to personally endorse the expo, according to interviews and answers from a Wall Street Journal survey of roughly 30 governments, more than a dozen multinational corporations and several trade groups.

Uncertainty about how the events will be organized, including China’s political goals, makes it difficult for global CEOs to attend, according to several diplomats and executives, even as some of them are expected to be in the region around the same time.

Some said high-profile attendance could appear as favoritism to Mr. Xi’s trade agenda, at a time when he is sparring with Mr. Trump. Others say access to China’s top politicians is unclear. Two people organizing corporate participation said they have been quoted a fee around $2,000 a seat to listen to President Xi’s opening remarks, amid expectations he could announce some market liberalization measures to satisfy foreign governments.

Expo organizers say 200 of the Fortune 500 companies rented display space in Shanghai. But of more than a dozen that responded to questions from the Journal, only one confirmed that a C-suite executive would go: Swiss health-care group F. Hoffmann-La Roche Ltd.’s Chairman Christoph Franz. More than two dozen G-20 and OECD member governments said their delegations would be led by trade or economic envoys, including major trading partners Germany and Brazil. 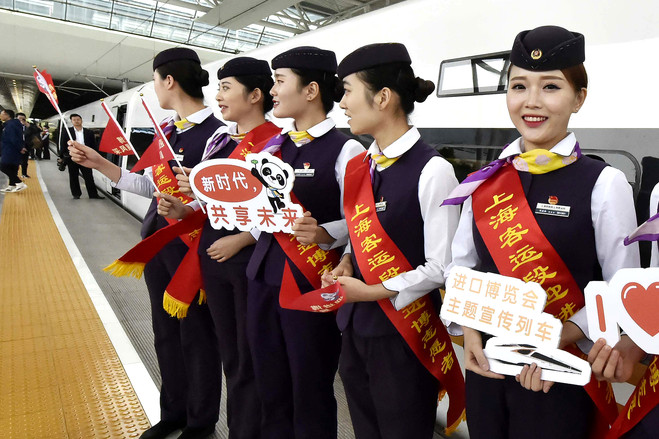 Washington hasn’t decided who might attend, the U.S. embassy in Beijing says.

One political heavyweight expected: World Trade Organization Director-General Roberto Azevedo, according to his office. A small number of heads of state are expected.

Under a clover-shaped, 15.8-million-square-foot venue starting Nov. 5, the expo may resemble the global economy itself with Italian helicopters and American soybeans, French baking yeast and a 200-metric-ton German milling machine.

Honeywell will show wearable technology for factory workers and software that schedules airliner maintenance. Steinway & Sons wants to lift brand awareness for its pianos. Facebook plans to market the commercial aspects of its social network, while Ernst & Young will demonstrate how blockchain works.

Shanghai is rushing through a $750 million construction spiff-up. Subways are already tricked out with visitor welcomes from the expo mascot, and the city plans a two-day school and office shutdown. According to official reports, the security clampdown by law enforcement extends even to visits by families of prisoners.

With the trade battle with the U.S. having amplified the Shanghai import fair’s political overtones, global companies are trying to calibrate how to show support for China and their businesses.

General Motors Chairman Mary Barra, EY Chairman Mark A. Weinberger and the chairman of Swiss drugmaker Novartis International AG, Joerg Reinhardt, are confirmed to attend a closed-door meeting with Shanghai’s mayor a week ahead of the trade fair, their representatives say. None is expected to show up at their companies’ displays at the Import Expo.