China fostered 97 unicorns – start-ups valued at least US$1 billion – last year, despite an economic slowdown and a prolonged trade war with the United States, according to Shanghai-based research firm Hurun Report.

The world’s second largest economy had a total of 186 start-ups last year, with a combined valuation of more than 5 trillion yuan (US$736 billion).

Alipay operator Ant Financial Services, an affiliate of e-commerce giant Alibaba Group Holding, led all Chinese unicorns with a valuation of more than 1 trillion yuan, according to the Hurun Greater China Unicorn Index 2018. Alibaba is the parent company of the South China Morning Post.

The Hurun index said the valuation of 18 unicorns more than doubled last year. Jinri Toutiao, live-streaming app operator Kuaishou and Meicai, which sells agricultural products online, have seen the fastest growth of about four times more than their peers.

Electric car start-up Leap Motor, founded in January 2017, was the youngest to join China’s elite unicorn club with a valuation of more than 7 billion yuan. 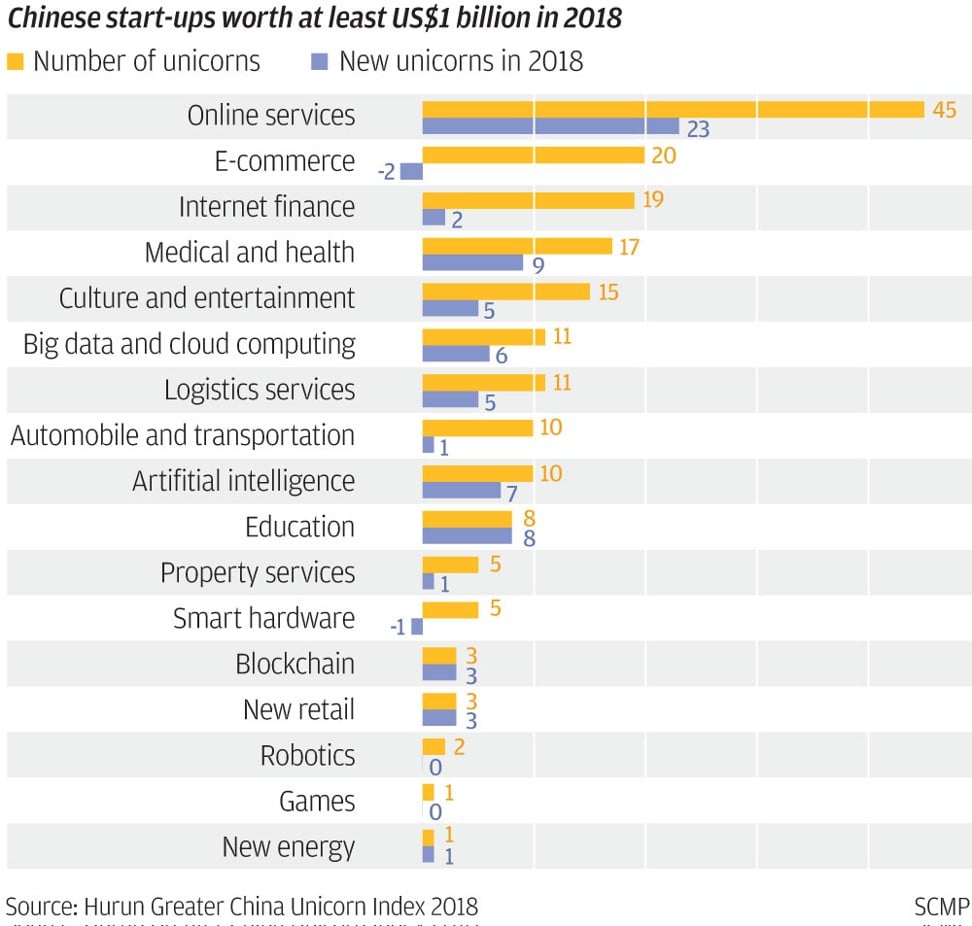 “This year, we have a record high number of people dropping from our Hurun China Rich List because of an economic slowdown,” said Ruper Hoogewerf, the chairman and chief researcher at Hurun, in a statement on Thursday.

The latest Hurun findings further burnish how China’s start-ups – in industries spanning e-commerce and financial technology to transport and artificial intelligence – have helped transform the way the country’s people shop, travel, invest, eat and get entertainment over the past decade, riding on a flood of enthusiastic investments from domestic and overseas venture capitalists.

US venture capital defies ‘cold winter’ to raise US$15.5 billion for Chinese investments

On-demand internet services unicorns, however, increased the most to 45. These include car-hailing app operator Ucar and JD Digits, the fintech unit of China’s second-largest e-commerce services provider JD.com.

While a total of 24 Chinese unicorns went public in 2018, some of these are now trading below their initial public offering prices like smartphone giant Xiaomi Corp and on-demand local services provider Meituan Dianping. That has resulted in investors’ weakened confidence in Chinese unicorns and triggered concerns about these firms being overvalued.

Hoogewerf, however, suggested these concerns are exaggerated. “Of the 24 unicorns that went IPO last year, over 70 per cent beat their pre-IPO valuation, which goes to show there is less of a bubble in the valuations than some people suggest,” he said.

Hurun also found that Beijing, Shanghai and Hangzhou were home to the most number of fast-growing Chinese start-ups last year – with 79, 42 and 18 unicorns, respectively, based in those major cities.

By Jane Zhang
The Star