The job fair in the Chinese boomtown of Shenzhen offered a white-collar future for a country that rose to economic greatness on the strength of its assembly lines, bulldozers and cranes. Technology, financial and real estate companies pitched jobs in sales, engineering, accounting and logistics. A $150,000-a-year salary, said one poster, “isn’t just a dream.”

But for many job seekers, it still seemed like one. At one end of the event hall, two dozen candidates sat dejectedly under a banner that read, “Hope you find a good job soon.”

“Job hunting,” said Hou Hao, a 28-year-old accountant who could not find a position that matched her previous $2,700-per-month salary, “now feels like being constantly slapped in the face.”

China’s slowdown, which has idled factories and construction sites, is rippling through its offices. Educated, white-collar workers are being hit with job cuts and shrinking paychecks. Even big technology companies like JD.com, the online retailer, and Didi Chuxing, China’s answer to Uber and one of the world’s most valuable start-ups, have not been spared.

The white-collar job distress suggests the slowdown in China’s economy, the world’s second largest, is broader than official numbers indicate. China increasingly relies on middle-class spenders who are helping to broaden the economy beyond its industrial base. But these consumers are not spending the way they used to, and that lethargy is ricocheting through every part of the economy, from the real estate market to China’s once-thriving tech sector.

The slowdown also suggests the government will have a harder time pulling the economy out of its slump.

China’s policy tools to kick-start growth — unleashing waves of loans from the state-controlled banking system or building new highways and airports — will not be much help for workers who process insurance claims or enter data into computer systems. Supporting those businesses and workers would require longer-term reforms, like getting state banks to lend more to private businesses or cutting red tape for entrepreneurs.

In the past, “by virtue of building a bridge, you could get the economy growing,” said Fraser Howie, co-writer of three books on the Chinese financial system.

Now, he added, “there is no obvious catch up, and therefore it makes it all the more important that China makes important, difficult decisions to move forward.”

Chinese leaders have acknowledged that creating jobs could be a challenge. During his annual news conference on Friday, Li Keqiang, China’s premier, said that Beijing would make employment for college graduates and laid-off workers a priority this year.

China does not disclose reliable jobs or layoff data, so the full impact of the slowdown is not clear. Some surveys show there is still high demand for jobs in certain sectors. But multiple signs point to trouble for other office workers.

One measure, based on a survey of services businesses, suggests shrinking employment in a variety of industries. Search results from Baidu, China’s biggest search engine, analyzed by Nomura, the Japanese bank, show the term “job seeking” rose to a high in December. Human resources executives and senior staff at tech firms, property developers and other large private companies describedlayoffs in recent months of up to 30 percent at some firms involving hundreds of workers, according to a recent survey by the research firm Global Source Partners.

On one major job recruitment website, Zhilian, the number of openings across all sectors posted in the fourth quarter fell 10 percent from the same period in 2017. New positions at technology firms and internet start-ups fell 51 percent in the third quarter of 2018 from a year earlier.

China’s office workers have suffered during past slowdowns, but cuts now have a broader impact as the country’s economy matures and they become a bigger part of the work force.

For workers like Sherry Xu, the weakened job market undermines the basic premise that a college education leads to a more secure future than a factory job. Ms. Xu, a 34-year-old finance professional, attended a prestigious university, and then rose through the ranks of the finance industry.

Recently, Ms. Xu was called into a meeting with human resources, right after she finished pitching to a group of potential investors. Her employer, a financial firm, was having a difficult time, she was told. Layoffs would start soon. She would be among them.

“The job market isn’t looking good,” said Ms. Xu, who after the meeting accepted a freelance contract with the same firm at half her earlier pay. “I feel this time, it will be harder than ever for me to find a job.” 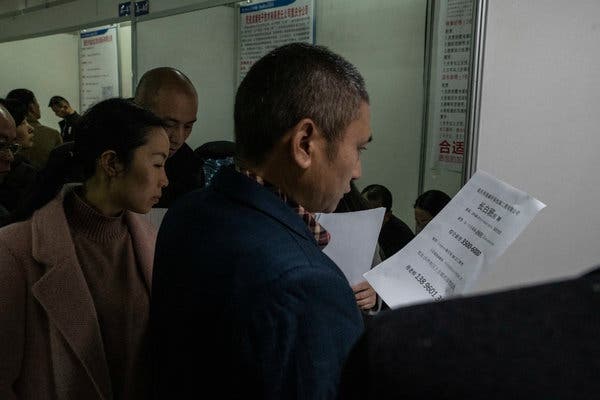 Just a week after Lunar New Year celebrations in China in February, Didi Chuxing, the country’s largest ride-sharing and taxi-hailing service, notified employees that it would cut 2,000 jobs — roughly 15 percent of its work force, according to a person with direct knowledge of the plan, who was not authorized to speak publicly. The cuts would target jobs that are outside the company’s core focus of safety technology, engineering and international operations, employees were told.

Chinese news media reports also said Didi was cutting back perks like free snacks and beverages. In a statement, Didi said it would adjust benefits but would not make major cuts without providing specifics. Didi said its benefits were as varied as health care services, meal and transportation subsidies, and corporate gym access.

JD.com, the e-commerce company, has started to evaluate employees with the goal of shedding 10 percent of its top executives, it told staff in February.

Layoffs, like other economic events, have become politically sensitive, and companies are reluctant to confirm the winnowing of staff. In response to reports that the e-commerce giant Alibaba was planning to freeze recruitment, the company published a statement promising to “hire more talent and increase our investment in talent,” adding that this was important “especially when the economy is challenging.”

Qi Feng started working in sales at Renrenche, the online car platform, nearly four years ago. Mr. Qi and other colleagues were called into a meeting several weeks ago and told to quit, he said. They were offered new contracts that required them to pay $6,000 to the company in exchange for customer data. They could then use the data to sell cars on the platform and pocket the profit. He said he had refused to quit and had been told that he would be fired.

“It has a big impact on me,” Mr. Qi said. He has monthly mortgage payments of $400 and a $300 monthly car loan. His daughter is just a year old, he said, and he and his wife take care of their parents.

A spokesman for Renrenche said the move was part of a strategy that would make employees into partners.

“For those who are not willing to convert into partners, we will handle them properly and according to law,” said Han Di, the spokesman.

Qiao Lifeng, a college-educated accountant who left the business briefly to open a restaurant, moved from Heilongjiang Province in China’s far northeast to Shenzhen, in the southeast, two decades ago when the city was at the front line of China’s economic overhauls. He got his first job at the Shenzhen General Talent Market, the same job fair Ms. Hou attended. He slowly worked his way up at several companies as an accountant until two years ago, when he decided to try his hand at building his own business.

Now that his restaurant has closed, he found himself back, but the world had changed.